This newsletter is brought to you by the Technical Planning Committee (TPC) of the Canadian Heritage Rivers System (CHRS) and is a forum through which heritage river managers and stewardship groups can share success stories and connect across Canada.

Previous volumes of the CHRS newsletter are available on our website.

The Thames River was designated as a Canadian Heritage River in August 2000, making this year its 20th anniversary.  The Thames and its watershed were designated based on the rich cultural heritage and varied recreational opportunities, supported by its diverse and unique natural heritage.

The designation was several years in the making. The effort began in 1996 when Dr. Douglas Bocking, retired Dean of Medicine at Western University, assembled a group of interested individuals and agencies who shared his vision of seeing the Thames and its tributaries designated a Canadian Heritage River. There were and still are many separate activities and efforts by governmental agencies and community groups in the watershed to increase the appreciation, enjoyment and stewardship of its features. The designation of the Thames has provided an overarching theme to provide common purpose and direction.

Dr. Bocking’s vision of increased awareness and stewardship for the watershed has taken root. Many projects have arisen, in part, because of this awareness. Below is a list of seven successful projects/outcomes:

1. The annual Thames River Cleanup was launched 20 years ago, right after designation, by watershed resident Todd Sleeper. He started the spring trash cleanup in his local community and soon expanded his efforts to the entire watershed, recruiting local volunteers to take on local reaches and bringing in local sponsors. The Upper Thames River Conservation Authority (UTRCA) provided early support to get the event going. In 2018, Todd received an award from the UTRCA for his efforts.

2. A river revitalization project called Back to the River was spearheaded by the London Community Foundation in 2016, in partnership with the City of London and the UTRCA. The goal is to create an accessible, inclusive community space that provides opportunities for economic gains and environmental stewardship and to transform the downtown core near the Forks of the Thames. A design competition was held and the successful design, called Ribbons of Life, includes features such as a lookout structure, pavilion, walking path and others. Several steps in the process remain, but there is optimism that elements of the plan will be realized in the near future.

4. The City of London and the UTRCA recently spearheaded a major water management plan for the Thames River called The Thames River (Deshkan Ziibi) Shared Waters Approach to Water Quality & Quantity (2019). This project is a collaborative effort of numerous First Nations, federal and provincial agencies, conservation authorities, and municipalities.

5. There has been renewed interest in paddling all reaches of the river since designation:
- Local enthusiasts created a website called Traverse the Thames.
- The UTRCA posts water level data for paddlers on its website.
- Ontario’s Kevin Callan, aka The Happy Camper, produced a YouTube series on his solo canoe journey down the entire Thames.
- A group of volunteers produced “Thames River Paddling Routes” to share detailed information to promote local paddling.

6. The Springbank Dam in London has been decommissioned after years of debate. This historic recreational dam created a reservoir that was well used by paddlers and rowers in the summer, but its stagnant water and disruption of fish migration and endangered turtle nesting were serious concerns. When a gate mechanism broke in the newly-refurbished dam in 2008, debate raged over whether to repair it. After extensive studies as well as expert and public input, the increased awareness about the dam’s negative impacts on water quality and aquatic species helped sway public and municipal opinion to finally decommission the dam in 2018. 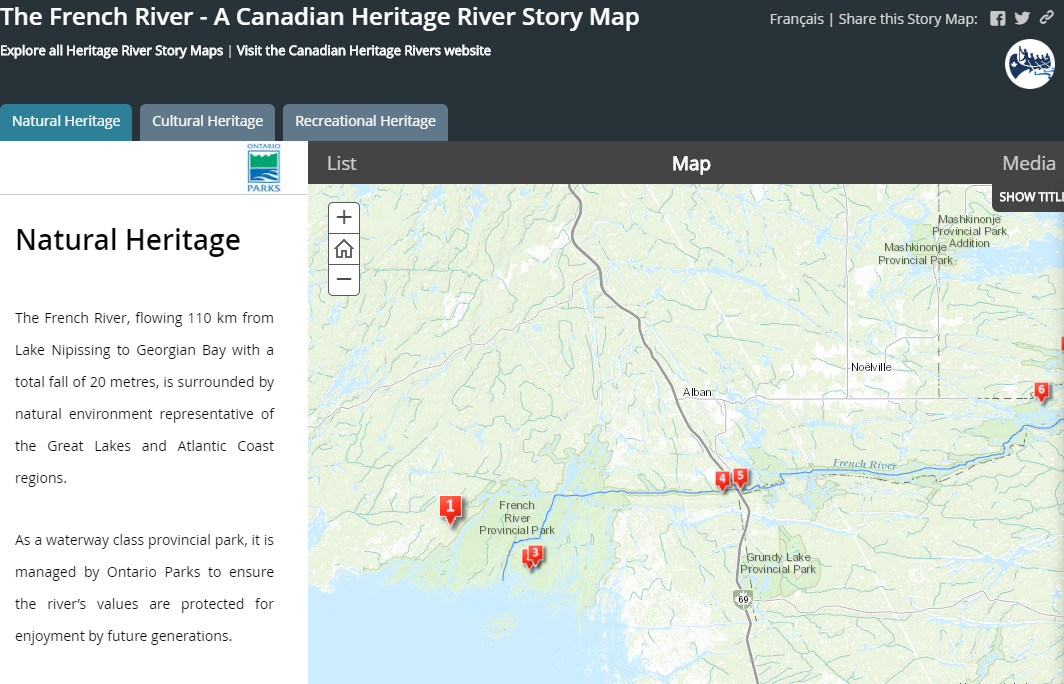 This year, we are celebrating river heritage across Canada with our new website and brand new feature- interactive Story Maps. The launch of these virtual maps marks the end of a collaborative project with our partners across Canada to bring 28 of our rivers to you though a virtual experience. This latest tool allows all Canadians to experience the natural, cultural and recreational stories of our rivers through outstanding visual materials and descriptions of features and landmarks. You will be able to investigate the history of the Red River lot system, the wildlife of the Kicking Horse River, the Five Finger Rapids of the French River  and so much more!

These maps will continue to allow all of us to showcase all the amazing things we love and cherish about our individual rivers and this collective national treasure.

The Upper Thames River Conservation Authority (UTRCA) acts as the lead Thames River manager for CHRS, in partnership with the Lower Thames Valley Conservation Authority (LTVCA). These local watershed management agencies deliver services and programs to protect and manage impacts on water and other natural resources, in partnership with all levels of government, landowners and many other organizations. The Thames is unique in that jurisdiction is split between the upper and lower watershed, owing to political differences when the authorities were established by watershed municipalities.

The UTRCA’s mission statement is “Inspiring a healthy environment” and working with partners is a key approach. The CHRS program is a good example of a community partnership project. The idea of pursuing designation for the river came from a local citizen, who sought the help of the UTRCA and other citizens to make it happen. The extensive research contained in the Background Study makes it an excellent reference document.

The CHRS logo is used on Authority correspondence (letterhead), websites, promotions, funding applications, and elsewhere. Twenty years after designation, many residents know the Thames is a Canadian Heritage River and it is not uncommon to see the designation mentioned in local community events and programs.